There just aren’t. By one estimate, women of color make up only 4% of the workforce at tech companies across the United States. In Silicon Valley, the beating heart of the U.S. tech scene, the numbers are actually even lower: Only 2% of employees there are women of color.

What this means is that if you’re a woman of color at a tech organization, you simply don’t see a lot of people who look like you. Not as peers or co-workers, and certainly not as leaders. 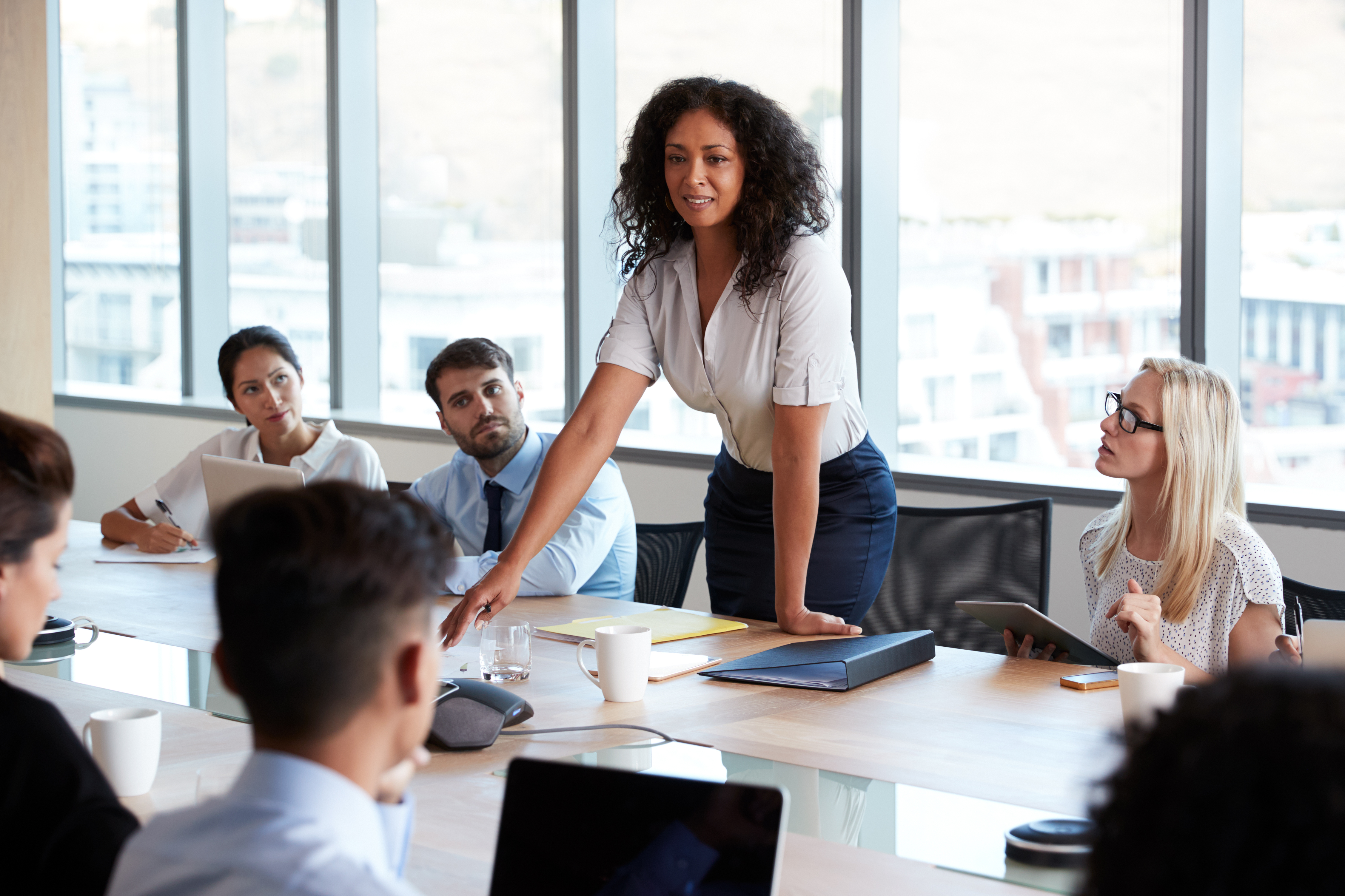 This lack of visibility and lack of representation creates several troublesome dynamics for women of color. For starters, it’s hard to feel totally “comfortable” in a setting where no one looks like you and where you’re likely to be the only woman of color in the room almost 100% of the time.

On top of this, women of color need to walk a tightrope of communicating their knowledge and asserting their point of view, but not coming across as too assertive. It’s a tougher balancing act than you might think.

If you have a point of view and you present it in an accommodating way, or if you soften your voice when delivering your thoughts and ideas, you are inevitably setting yourself up to receive feedback from the higher-ups that you don’t have “leadership qualities” and that you’re not “leadership material.”

Logically enough, you might assume that if you’re being dinged for being too “accommodating,” then you should go in the opposite direction and turn up the assertiveness. But that’s all too often a trapdoor: The assertive woman of color is then tagged as the “Angry Black Woman.”

The net result is that women of color spend a disproportionate amount of time and emotional energy just trying to strike the right balance when sharing their point of view. Considerable emotional energy is also spent wondering why certain decisions that might directly impact their professional trajectory were made.

For example: Why didn’t anyone ask me if I wanted to serve on that committee that was recently formed? Why didn’t I receive a promotion? Why’d they choose someone else? Is it because I wasn’t as qualified — or is it because I’m a woman of color?

Sorting through these questions — questions that most employees in the tech world don’t have to ask themselves on a regular basis — is exhausting.

Automatically, then, there’s a lot of energy that women of color have to dedicate to just being in the tech world — and because there are so few women of color to turn to for support, the situation is even more of an emotional drain.

A Multipronged Approach for Improvement

So, what can tech companies do to improve this state of affairs?

A good starting point is to improve their recruiting practices. You can’t have representation and visibility for women of color if you aren’t actively working to recruit those people. This means casting a wide net for talent, rather than relying on the same set of colleges that the existing members of the company all graduated from.

Partner with HBCUs, female engineering societies, and other talent pipelines that produce women of color. Your goal is to create a diverse candidate pool — and you give yourself a better chance of hiring people that don’t look like the majority of your organization if you reach out to places where there are a lot of those different-looking people. It’s just simple math.

As a next step, tech companies might want to mandate that all candidate slates for a position have some element of diversity in them. That doesn’t mean that a final candidate will be selected based on whether they’re a woman of color or not. It just means that you’re creating a diverse pool of candidates, so that as you bring in the right people for each role, you’re increasing the chances of bringing in the desired diversity.

Recruitment, of course, is just the beginning. Once you bring women of color into a tech organization, what are you doing to support them? Are you creating opportunities for visibility? Are they put on high-profile projects or cross-functional task forces? Are they invited to speak or give presentations? This visibility — no matter what form it takes — is key.

Employee resource groups (or, affinity groups) can also be a powerful source of support, allowing women of color to have a space at work where they can interact with people who have similar backgrounds, life experiences, and challenges. These groups create a sense of belonging. They’re also a great “brain trust” for the organization to tap into to learn what’s working and what isn’t, as far as creating a more inclusive environment.

A quick word of advice here on employee resource groups. There is a tendency among companies to lump women of color in with women in general. The thinking goes: If there’s already a women’s resource group within the company, there’s no need to create a group for women of color.

This one-size-fits-all approach is less than optimal, and tech companies would be wise to recognize women of color as their own entity, with their own distinct nuances and needs.

The experience of women of color is going to be vastly different than that of the majority of the tech world, which is white males. This is neither good nor bad, but simply a fact.

In recognizing that fact, however, tech companies are in a position to start addressing how best to bring diversity into the organization, and how to ensure that women of color are supported, represented, and visible at multiple levels.

Doing so will substantially change the experience of what it’s like to be a woman of color in the world of tech, helping to move the needle towards a more diverse — and ultimately, more effective — tech workforce.